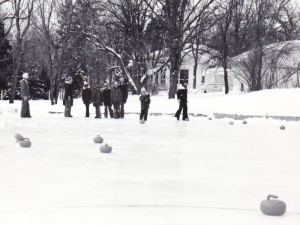 Woodhaven is located in one of the most beautiful parts of St. James, bounded by Sturgeon Creek, Assiniboine River and the St. Charles Golf Club. It still has the “little country” feel even though it is within Winnipeg. The picturesque neighborhood is covered with mature oak trees, large green fields and a meandering creek. One can imagine the first inhabitants with their burial mounds or the buffalo hunters using the area as a preferred stopping place. Some people say they still do.

The homes of Woodhaven, as it exists today, were mostly built during the 1940’s and 1950’s when the main streets were laid out. There is however, still some evidence of an earlier time. The foundation of a home discovered on the river bank at the golf course is believed to belong to Jean Baptiste Lagimodiere and his wife Marie Ann. The first white woman to live west of the Great Lakes, Marie Ann is the grandmother of Louis Riel.

Cuthbert Grant travelled down the Assiniboine to the mouth of Sturgeon Creek, gathering his men for the attack on North Winnipeg. Grant survived the Seven Oaks Massacre of 1816 and returned to Woodhaven where he established a water grist mill, the first of its kind on the Prairies. This rural farming area remained so until the early 1900’s when it became a popular spot as a summer resort. Summer homes, smaller lots and more streets were developed to accommodate the new arrivals.

The winding stream, large oaks and Woodhaven Park continue to make this historic area a pleasant place to live.

Club Rental Request
Please enter your contact information and date requested. We will get back to you shortly!